Licensed games are one of those things… All too often the developers and the sales department assume that a name alone – maybe garnished with pretty figures and nice graphics – makes the game a big seller. At the beginning the tills might ring, at least to the point where disappointed fans realize: The game is boring.

TMNT – The comic book game that does everything right

Luckily, there are licensed games like Teenage Mutant Ninja Turtles: Shadows of the Past, which meet all expectations, those of comic book readers as well as those of the board game community. Initially financed with Kickstarter, TMNT is now also sold in regular shops.

Responsible for the game is IDW Games, which is the games department of the current TMNT comic series’ publisher. This is probably the reason for the high-quality standards in graphics and design. But good looks alone are not enough to make a good game. That’s why they left this part of the development to someone who knows his trade.

With cult game author Kevin Wilson (Descent, Arkham Horror), IDW has brought just the right one on board to create the perfect symbiosis of comic and miniature board game. And it shows his handwriting unmistakable.

Especially gamers who like dungeon crawlers will have fun with this sewer crawler. The game follows the familiar principle of heroes attacking the enemy by throwing dice and using your character’s individual statistics. One difference to the classic crawler is that the stats remain unchanged. Heroes for selection are of course Michelangelo, Donatello, Raphael, and Leonardo. One of the players slips into the role of the “Overlord” and plays Shredder.

The Adventure Comic is played in several scenes that are similar to a video game, in which the levels become increasingly difficult and each chapter is equipped with bosses. Of course, a comic strip is included, on which the game is based and on which the campaigns are oriented.

The design and equipment are, as already mentioned, first-class. Not only the artwork for playing cards, tiles and instructions is of high quality. As you would expect of a good miniature board game, the 40 figures also bear witness to the high standards of their makers.

For more order and protection: The foam tray set for the board game box

And because you can not only play with the miniatures but also give them more life with the right painting, we make sure that the painted figures are properly stowed afterward.

The foam set, suitable for the original board game box, consists of two custom-made trays, in which the minis are padded softly. In addition, the rest of the game material, such as cards, dice, and tokens, can be stored clearly and neatly.
You can get the Feldherr foam tray set for the Teenage Mutant Ninja Turtles: Shadows of the Past board game box in our online shop.

Do you have any wishes or suggestions? Let us know and write us either via our Facebook page or by email to ideas@feldherr.org. 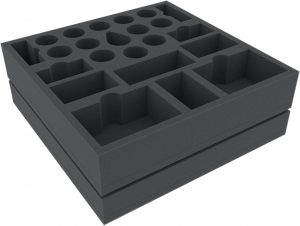