Light versus Dark, Good versus Evil, Rebel Alliance versus Galactic Empire: The struggle between the two opposing forces in Star Wars is as old as the hills. And yet, the myth is as intriguing as ever, all the more so when it unfolds on a game board – and involves you as a player.

In 2016, the Star Wars mania shifted up a gear. Fantasy Flight Games introduced Star Wars: Rebellion and the board game community was instantly fired up. Rightly so, considering the massive success the game has since turned out to be: glued to the Top-Ten at boardgamegeek.com, Tric Trac- and Goblin Magnifico nominee, winner of Best Board game with miniatures at UK Games Expo in 2016.

What’s so great about it?

Well… pretty much everything. In terms of gameplay, for instance, Rebellion is a veritable gem. Within the highly asymmetric setup, you’re either Empire or Rebel. As Empire you search and destroy, as Rebel you operate in disguise and build alliances.

Say you are Rebel. The question is: Where do you place your base? Far away from the Empire, where it takes them a long time to get to you? Or close to the enemy, where you would be expected the least? With each successive session you’re getting closer to developing a fool-proof strategy – only to find that your opponents have refined theirs as well.

What about the minis?

When Corey Koniecka, game designer, signed up as chief designer for Rebellion, he had acquired quite a few credentials already. Having been co-responsible for the extremely successful Star Wars: Imperial Assault, he certainly knew what he was doing. And it shows: The game abounds with carefully crafted, highly-detailed miniatures. In fact, exquisite models like the Super Star Destroyers and the Mon Cala Cruisers almost look like they had flown straight from the movie screen to your game board.

A safe harbor for your spaceships

Your miniatures may be tough as hell in intergalactic battle – when faced with seemingly mundane threats they are actually quite vulnerable. Dogs may gnaw away at your X-Wings, children may threaten to re-paint your Death Stars. Or else, your Shield Generator might plain and simple break during transport in your backpack.

What to do? Get organized and protect your models. For inspiration check out our Foam Set for the original board game box. In addition to safe-guarding the 153 models of Star Wars: Rebellion, the Set is a time-saving organizer as it holds and sorts markers, tokens and dice, as well. 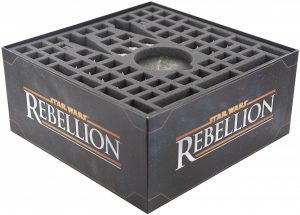 Rise of the Empire

If you went all-in and bought the Rise of the Empire expansion in addition to the base game, you need bigger guns to stow it all. We recommend this MAXI-Set which includes not only four custom trays but also a sturdy bag for seamless transport. Enjoy! 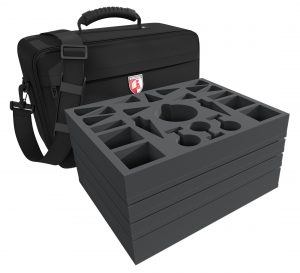 Happy with our foams? Any suggestions on what we might do better? We love Feedback. Send us an e-mail to ideas@feldherr.org or let us know via our Facebook page. Be in touch.